Eddy Zawilla, owner, EZ Tent Rentals, Brookfield, Ill., had never been to an ARA of Illinois event before. When he saw that the state chapter was offering a Chicago Blackhawks hockey game event Dec. 9 in a luxury suite at the United Center, he thought this would be the time to go.

“This worked out well in my schedule as it is a slower time for us. I wanted to go for networking purposes — to mingle with individuals who are in the same industry as me and who are local. I also wanted to take some of my employees to show them my appreciation for their hard work,” he says, adding that supporting a Chicago team is important, too.

He wasn’t disappointed. “I took three of my guys. We had fun. It was good to kick back, watch the game and just have a good time with everyone. It was a good team-building event with my team, too, and I was able to meet other rental operators,” he says. 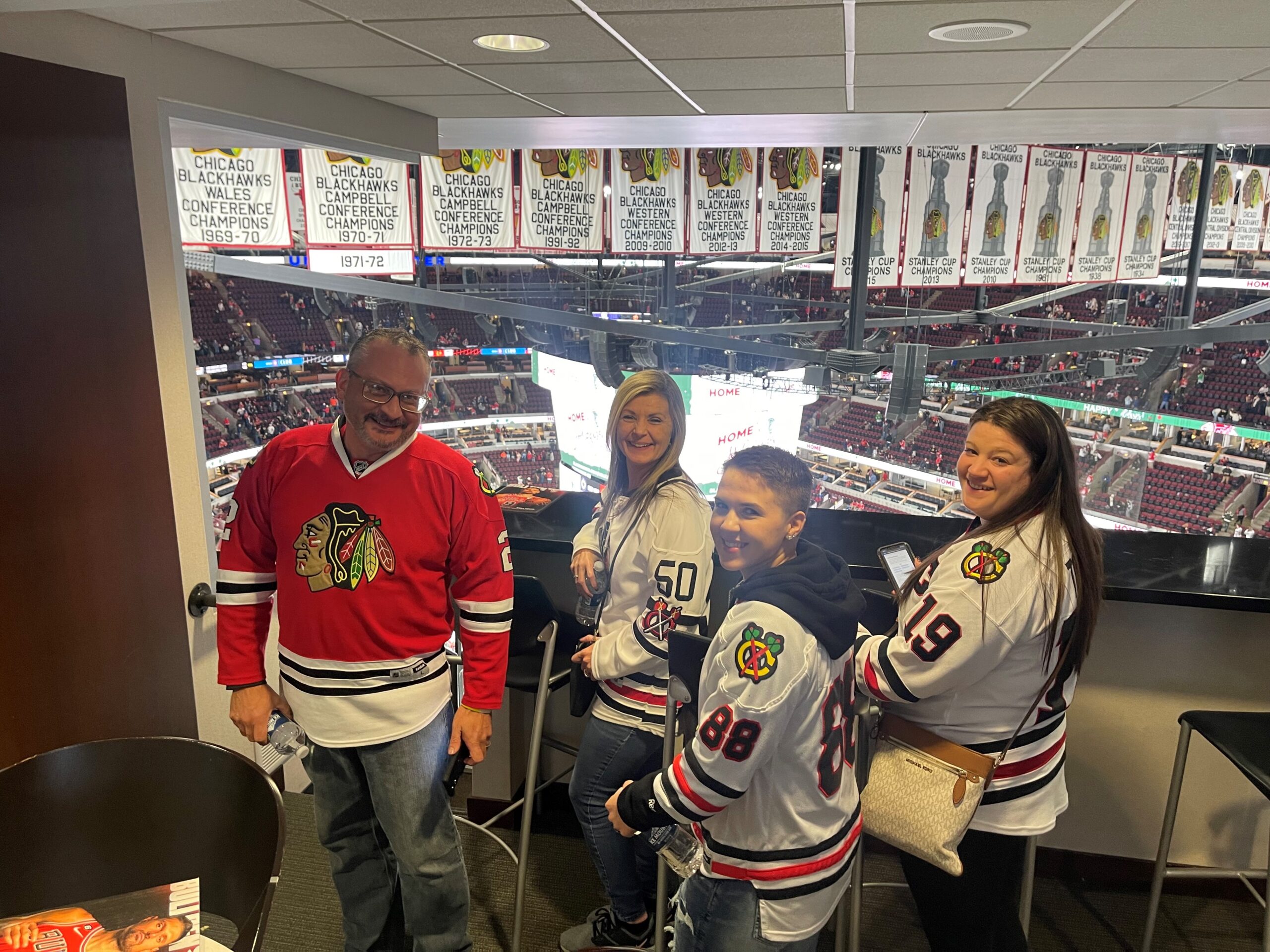 Robert Sloan, president, Contractors Equipment Rentals, Elmhurst, Ill., also had a great time. “I went with my son, who is a sophomore in high school. I knew about half of the people who were there and talked with them and met some new people, including a rental operator who specializes in OSHA safety equipment. It offered valuable networking. The food was great, too. My son was very excited about that,” he says with a laugh.

“It was fun — a nice get-together with your local rental operators and vendors,” adds Elie Kari, rental manager, Burris Equipment Co., Joliet, Ill., who attended with three of his colleagues, thanks to an invitation from his boss, Bryan Heinrichs. “It was really nice to be able put faces with names and voices who we talk with on the phone, see what is going on with others, stay up to speed and build relationships with them. The suite offered a great atmosphere and layout. The food and drinks were wonderful, too,” he says.

While the Blackhawks didn’t have a successful night, losing to the Winnipeg Jets 3 to 1, that didn’t dampen anyone’s spirits.

“I wasn’t expecting them to win,” Zawilla says. “They aren’t doing the greatest right now. We came there to have a good time. I am not an avid Blackhawks fan, but I have a Blackhawks jersey. It was more for us to enjoy the time together.”

Kari agrees. “Obviously we didn’t want to see the loss, but there were a couple of fights on the ice, which we always like to see in hockey,” he says with a laugh. “We had a perfect view of the ice, whether you were in the seats or standing in the back, so it was nice.” 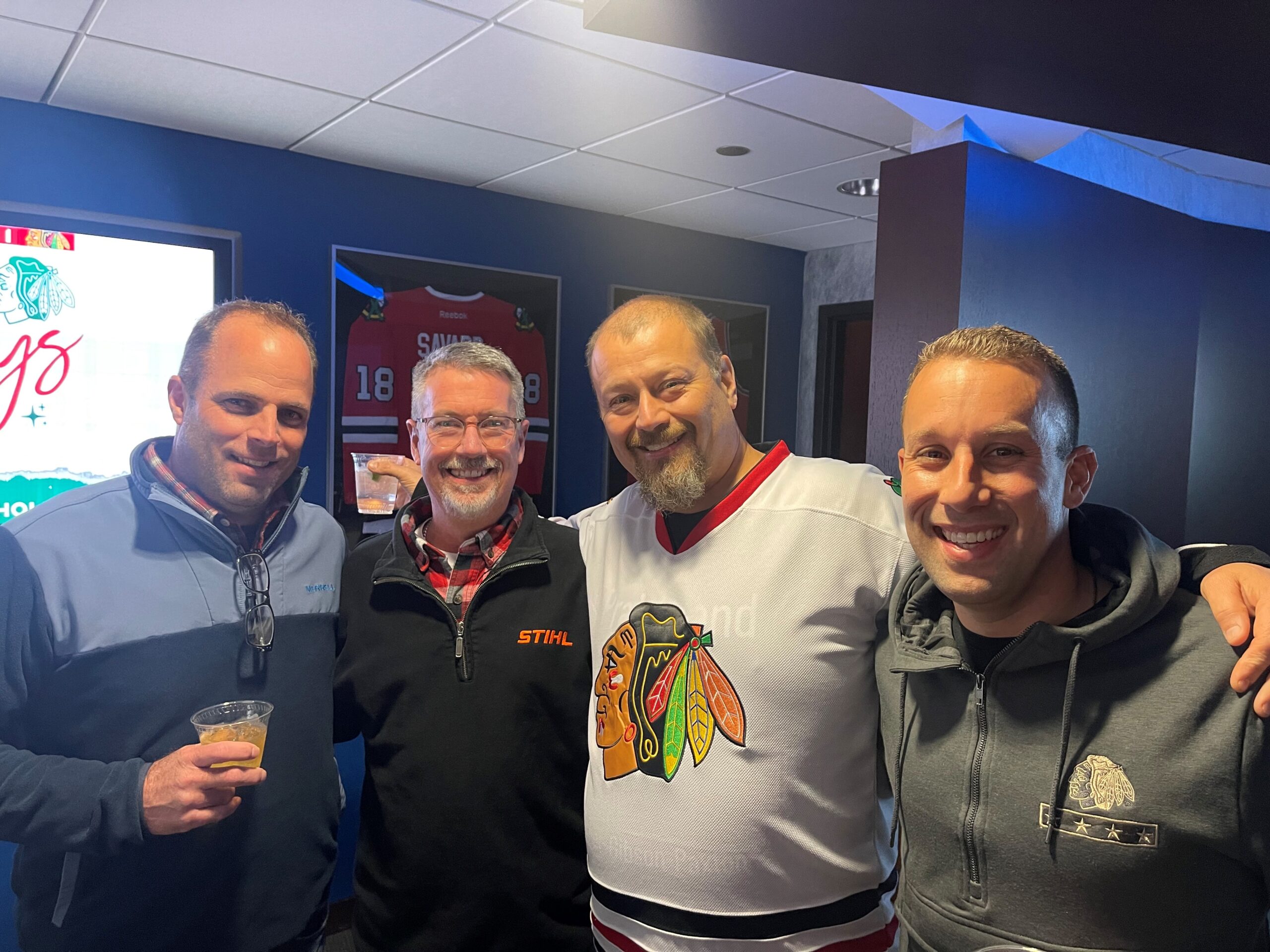 Sloan, a Blackhawks fan, wished the score had been different, but no matter the outcome, “the game was great,” he says.

All agree they would definitely go again.

“I would absolutely go attend,” Sloan says. “It was a great way to network and relax with your peers and other vendors. It was a fun night out. We all get so busy that it is nice to be able to get together like this. I think it was great and really appreciate the ARA of Illinois offering this.”

And, with the ARA of Illinois “offering these tickets at a discount to us, it is a sense of appreciation to all of us for being a member. It also gave me the opportunity to show appreciation to my guys. I can’t put a value on that,” Zawilla says.