Member profile: How Rushmore Equipment knocks it out of the park

A structure fire is never a good thing, but for Troy Schlosser, it was the literal spark that led to the acquisition of the 5-acre property that today houses Rushmore Equipment in Black Hawk, S.D., a business that went from zero to gangbusters in equipment rental activity soon after its opening in 2009.

Schlosser, owner/partner of the family-owned Rushmore Equipment, had been an employee of commercial vehicle manufacturer Peterbilt for 13 years leading up to 2009, when he struck out on his own to set up a business to buy and sell construction equipment. As it happened, he set up a humble shop right next door to the larger facility of his former employer. But circumstances soon saw Peterbilt out of the picture and the entire lot the domain of Schlosser’s Rushmore Equipment.

“I quit Peterbilt and started right next to them in a little log cabin,” Schlosser says. “I leased a lot and just started the buying and selling process. We just did skid steers, telehandlers and small stuff. Then the Peterbilt dealership right next door caught on fire and burnt. They didn’t own it, so the people that owned the building and were leasing it to Peterbilt wanted to know if I would be interested in buying it with it burnt. We negotiated a price, I bought the building and rebuilt here where Peterbilt was. That was in 2014, so I would have started rental in 2012.”

Equipment rental was not part of Schlosser’s business plan at first.

“I had all those telehandlers and skid steers on my lot for sale, and people kept asking me if we would rent them. All I could say was no, because I didn’t want to get into it. I finally decided that maybe I would rent out a few skid steers and telehandlers. It just took off like gangbusters. Now I hardly do any buying and selling — it’s all rental,” he says.

Schlosser traces his connection to construction equipment back to the work he did growing up with his father and Rushmore Equipment co-partner, Stan, who oversees the business’ second location in Timber Lake, S.D.

“We bought and sold equipment. My dad had a contract construction business at home, and we would dig municipal stuff like water and sewer lines. If we needed a backhoe, we would just buy one in the summer, and in the winter we would fix it up, make any repairs that it needed and put it up for sale. We would just take our profits and buy better equipment,” Schlosser says.

After opening Rushmore Equipment strictly as an equipment buyer/seller, in keeping with his and his father’s tried and true practices, Schlosser soon pivoted to rental in response to customer demands, and there has been no looking back.

Today, Rushmore Equipment caters to the needs of clientele comprised mostly of construction contractors. “Here in Black Hawk, they build buildings and do underground fiber work. Timber Lake is on the reservation, so you’ve got things going on there or at the power plant down at Pierre, but it’s mainly farmers and ranchers up in that country. There are probably only 10 pieces [of rental equipment] up at our Timber Lake store, and here we have 300. Black Hawk is our main deal,” Schlosser says.

From its lot in Black Hawk, situated next to Rapid City on Interstate 90 in Western South Dakota, Rushmore Equipment rents mostly the “big stuff. If it fits in the back of a pickup, we probably don’t have it. We’ve got motor graders, excavators, boom lifts and telehandlers,” Schlosser says, adding that while his main customers are contractors, “we picked up a lot of homeowners since COVID. You rent to the contractor during the week and they’re bringing it back, and you’re renting it to the homeowner on the weekend.”

The lion’s share of Rushmore Equipment’s line of telehandlers and boom lifts are Genie; however, the scarcity of new equipment in recent years has forced some deviation from exclusivity on that product line. “We have 52 telehandlers, mainly Genie. I’ve got a few Cats mixed in there. In the last few years, we’ve just not been able to get much new stuff. So, I have bought a few used Cats and some JLG stuff,” Schlosser says.

For dirt work, the company offers a mix of Kubota and Caterpillar equipment. “All my big excavators are Cats, like my bigger 50,000-lb. machines. For skid steers and mini excavators, I’m all Kubota,” Schlosser says. 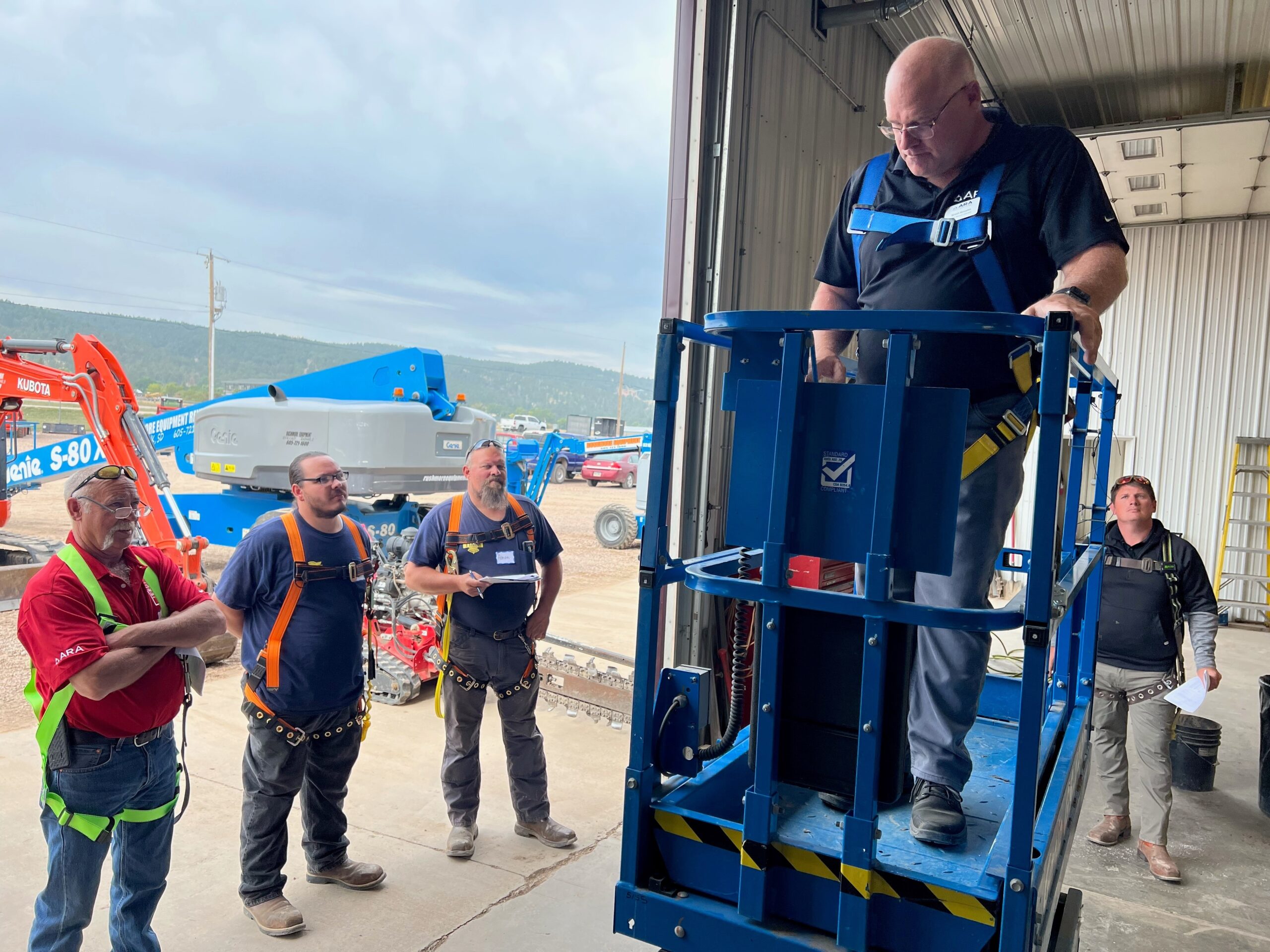 In a rapidly expanding market — the Rapid City/Black Hawk area of South Dakota is one of the fastest growing in the nation, according to the U.S. Census Bureau — the principals at Rushmore Equipment reckon that one simple philosophy sets them apart from their competition: Treat your customers the way you would hope and expect to be treated yourself.

Referring to the personal attention they devote to clients, Kelli Bruhn, who has served as administrative assistant and Schlosser’s “right and left arm” at Rushmore Equipment for six years, says, “I would say it’s our customer service and the fact that we are a small enough company that we know our customers,. And on Sundays, too. We’ll tell them we’ll get it there. If we don’t have a lift, we’ll come up with one.”

That kind of dedication to client service has paid off for Rushmore Equipment in the form of explosive growth.

“In the last four years we have really blown up; we went from having one delivery driver to now where we have four drivers and still have days where we just cannot keep up,” Bruhn says. “We have grown our inventory to a point where I am still in awe when I walk out into the lot, and it is empty and the phone is still ringing.”

Bruhn says the hardest part of navigating the company’s growth is “the scheduling and trying to come up with enough equipment to keep everyone happy and working. Troy and I have really found out how much of a team effort this is and it’s a good thing we both share a very strong work ethic. We have also learned how important our reputation is; word of mouth is a powerful thing and luckily we both take pride in Rushmore Equipment.”

Ten years into the equipment rental game, Schlosser feels that while it sometimes can be exhausting, quick, careful attention to customers’ needs has been the key to his success. “Kelli and I think this is an easy job to rent stuff. But the hard part is to keep the customers happy and keep everything flowing. The customers are there and if you treat the customer the way you want to be treated, you can knock it out of the park,” he says.