It's all about making the clients happy 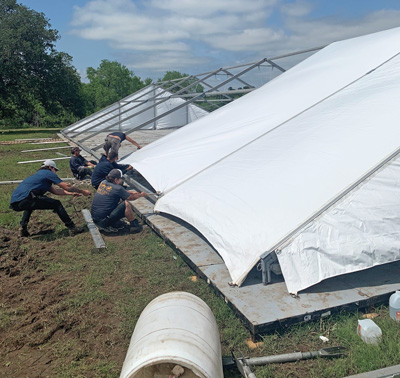 The event was set to be a high-end grand opening for a brand-new, state-of-the-art municipal solid waste landfill — the first built in the Central Texas region in 30 years. The clients wanted to showcase how the project was environmentally friendly and how they planned to preserve the nearly 1,200-acre property, 500 acres of which was dedicated to the landfill, as it was when they purchased it.

“I work with this company a lot. I do a lot of our large tent installs in the middle of nowhere. Groove Labs brings in my power and AC units. Because the clients also needed tents and other rentals for this grand opening, Groove Labs reached out to me,” Hierholzer says.

A key part of this event was that the clients wanted to showcase a beautiful view of the lake that is on the property. “The owners, our clients, are big on protecting the environment. They wanted to showcase that even though this is a landfill, they won’t be altering or piling up trash on this beautiful property. They wanted to have a grand opening here, which is about a 10-minute shuttle from the landfill. This specific location was very important. They wanted the grand opening to be high-end but not look like a wedding. They also wanted their guests to take in the natural views of the property and be able to gaze out at the lake,” she says.

The goal for the team at Premiere Events was to “make the clients’ vision come to life,” Hierholzer says.

She recommended the tent sizes for the guests and food accommodations, and created a 3D computer-aided design (CAD) layout to help the clients visualize and see everything before the installation. Because a planner had not been hired, Hierholzer also took on that role, “designing their linens, tables, chairs and such to match their invitation and the general aesthetics they were going for in the grand opening. Because this event was planned while we were still in the midst of COVID, I also brought in vendors to provide hand sanitizing stations and comfort stations, or luxury portable restrooms,” she says.

Everything was set to put up a 50-by-100-ft. tent for the guests with a full platform underneath with a 52-by-104-ft. footprint. In addition, the Premiere Events team would erect another 20-by-40-ft. tent that was connected to the main tent for the food prep, which included a 20-by-40-ft. platform underneath. Premiere also would handle all the rentals for inside the tent as well as acrylic sneeze guards for the barbecue buffet.

Unfortunately, Mother Nature did not want to cooperate. “It rained for four solid days prior to the installation,” Hierholzer says. “We couldn’t push out the installation because we were booked on deliveries. We were not able to move it up. There was another location of huge, dried rock — like crushed granite — but the clients refused to do it there because there wouldn’t be the view that was wanted and had been envisioned. They said they didn’t care how long it took or how much they would be charged. They wanted it to happen in the original location.”

So, Hierholzer and her team made the best of a challenging situation. “It had stopped raining, but we didn’t have time to let the site dry. We did it with the ground wet. It was a complete mudfest, which made it a lot more difficult. Our tires were spinning. Some of our trucks got stuck. Luckily, since it is a landfill, they have big machinery and were able to tow our trucks out. There was a lot of teamwork with everyone. Even after we got the trucks pulled out, we were afraid the stage pieces for the tents might just sink into the mud. We were afraid we wouldn’t be able to level everything out,” she says.

But the Premiere team made it happen. “We were covered in mud. We couldn’t use our Tent Ox to haul equipment in. Our guys had to manually carry in the stage pieces. They put down wood shims and the guys made sure everything was level and ready to go. We also had to make sure the platform was ADA-[Americans with Disabilities Act] compliant as Gov. Greg Abbott was invited. I was out there with the guys and personally locked together each stage piece — a total of 396 pieces. On that first day we also put in the Astroturf on top of the flooring. On the second day we put in all the other items in the tent and made it look pretty,” she says, noting that those were very long days.

Even though the tents and all the accessories were in place, Hierholzer was concerned about the guests moving from the shuttle to the tent. The crew from the landfill ended up putting down lots of mulch to make a pathway that could be walked on safely.

“We were holding our breath,” Hierholzer says. “Luckily, the weather held out. Everything dried up and they had an amazing event. When our clients showed up and saw everything, they were in awe and said, ‘You did it.’ They were extremely happy.”

For Hierholzer and her team, “we had a huge sense of accomplishment. It turned out beautifully. When we tore down, everything was covered in mud and had to be washed. We were so happy that we had achieved our goal. Those who came had no idea the struggles that we went through. I think it is really cool as event professionals that we get to see all the obstacles and the successes of the event. It is very rewarding,” she says.