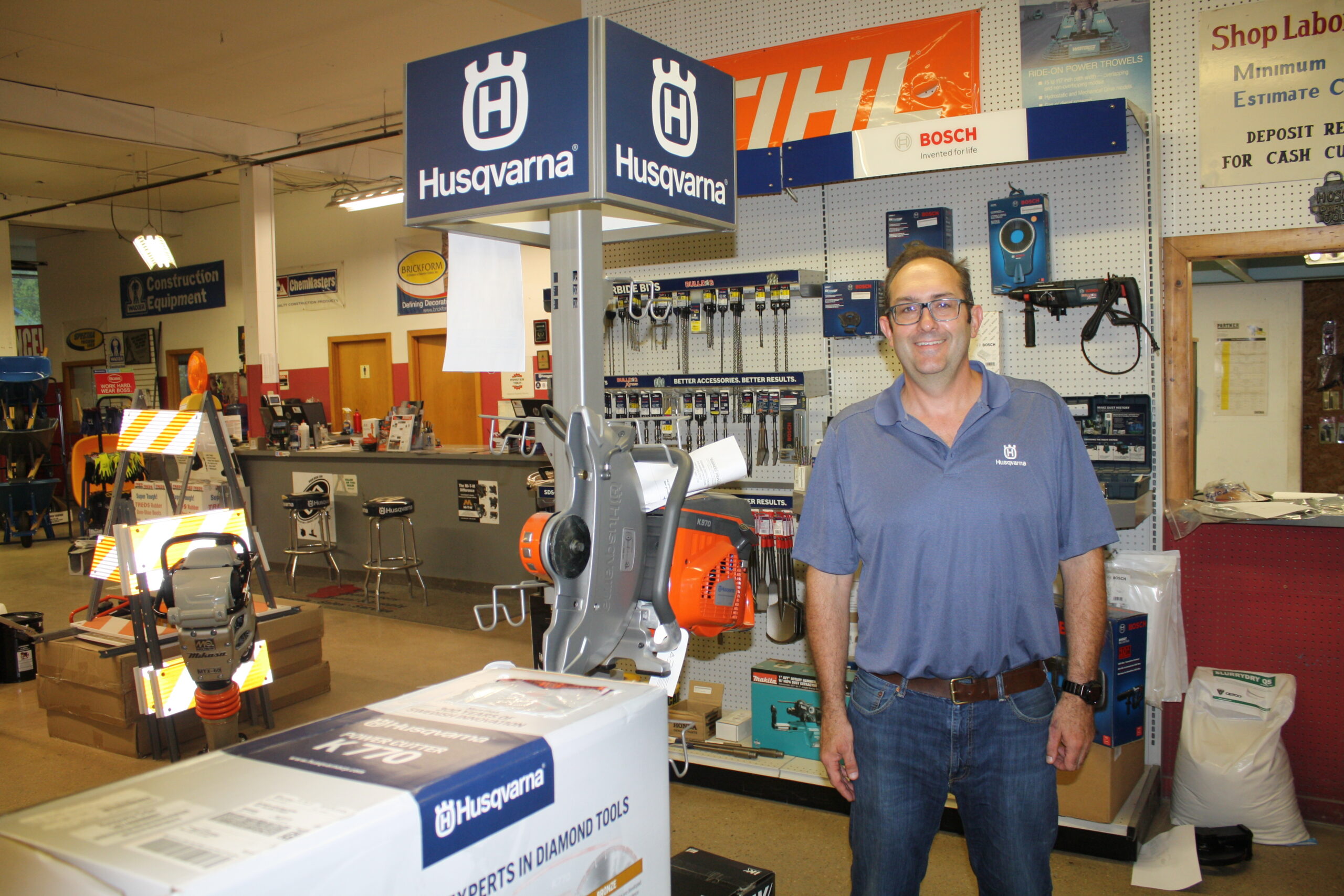 Brian Mueller remembers when he started working in the equipment rental industry in 1989.

At the time, his late father, Glenn, was running his own equipment rental store, the same place in Madison, Wis., where his son is on this day.

“I was 13,” he says. “I was the janitor and I got promoted to grunt. And that’s where I leveled off. Even now, I’m a grunt. You can call me chief executive grunt (CEG).”

Mueller, president of Badger Contractors Rental & Supply, with locations in both Madison and Janesville, Wis., smiles when he says this. Mueller is celebrating 20 years running his own equipment rental businesses, but as far as a career, he’s been in the industry for most of his adolescent and adult life.

His stores rent a variety of equipment in construction and general tool categories serving both commercial customers and homeowners. On this rainy afternoon, Mueller is in his Madison store. Customers come in occasionally to the counter for rentals, as maintenance technicians work on machines in the building’s shop.

“Honestly, I do enjoy the customer interaction,” Mueller says. “You are helping a customer solve a need. I continue to educate myself and learn about new products. We’re able to share that knowledge with our customers.”

Mueller says general contractors usually have a pretty good idea of what type of equipment they want to rent.

“They may be renting because they have too many jobs going on,” Mueller says. “Whatever the case might be, they know what they’re doing. We work hard to get those rentals. Those are great customers.”

Homeowners are another segment Mueller’s stores cater to and those customers provide a challenge with rewards.

“It’s also fun, because there may be a little bit more of a conversation or investigating with the homeowner. We might ask the customer, ‘what are you really trying to do?’ Sometimes, you’re redirecting them and telling them a certain option may save them some time and some money. Equipment has gotten safer and easier to use over the years, so that’s been helpful as well,” he says.

The industry has changed in recent years after a global pandemic and geopolitical unrest. Finding labor was and still is a challenge. Mueller says people started learning how to do their own projects using social media options such as YouTube.

And, as people became more comfortable taking on their own projects, his stores have seen a spike in homeowner rentals.

As for rental demand, 2022 has been a good year for his stores.

“Rental demand is much higher due, in part, to the fact that people can’t buy equipment,” he says, adding supply chain issues have been a challenge.

He says his stores primarily rent small equipment and general tool products. Rentals include concrete equipment such as saws, along with air tools, air compressors, landscaping tools, walk-behind skid steers, scaffolding, trenchers, vacuums and more. On this day, two of his employees are working on a riding trowel in their maintenance shop. Brian Elmer is Mueller’s service manager. Andy Harbort describes himself as a jack of all trades. Elmer has been in the business, working for Mueller or his father since 1987. Harbort has been with the business since 1995. The engine on the riding trowel runs at a high rpm, the idle faster than it should be.

“We’re trying to figure out how to adjust the carburetor to make it idle properly,” Elmer says. “Or, we may have to replace the carburetor.” 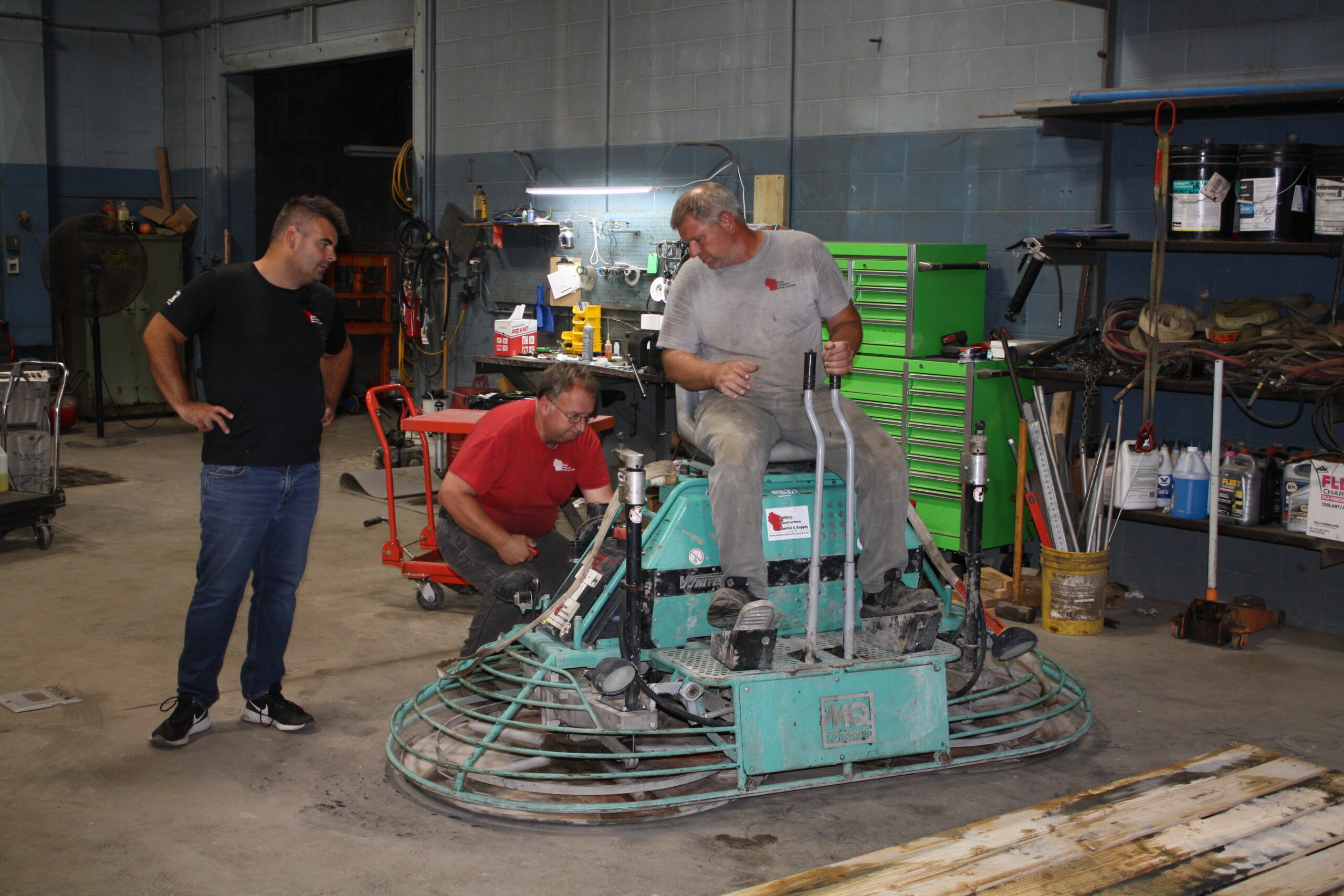 For Mueller, the experience the two men have is invaluable to his operations.

“We really do specialize on concrete trowels, especially the MQ Whiteman riding concrete trowels. We get trowels from out of state when other people can’t figure it out. They’ll send them to our mechanic to look at. He’s been working on Whiteman trowels for 35 years. In fact, we have communications with their design team sometimes when they come out with a new trowel. They’ll listen to our feedback. Brian is honest with them with either, ‘this is really good or this is going to be a problem,’” Mueller says.

“We have a good work environment here,” Elmer says, screwdriver in hand. “It’s a good place. We have to know multiple brands, multiple items. We work on diesel, gas, electric, transmissions, gearboxes.”

Harbort, sitting on the trowel, leans over and says, “we do a little bit of everything. We all have to help with different things.”

The origins of the stores started in the late 1950s or early 1960s, Mueller says. The Madison store then was known as A & E. Mueller’s father and another man bought the store in 1985. In 1999, they were bought out by Hertz Equipment Rental Corp. (HERC), which is now Herc Rentals. HERC had three locations in the area, but shut them down in 2001. Mueller’s father had worked for them and saw a need in the Madison area for continued equipment rental after HERC closed the doors. He asked his son if he wanted back in the equipment rental business and then worked out the details of a noncompete agreement. In 2002, Mueller had a job in distribution for Gatorade. He was comfortable, but a promotion would have meant moving out of state, and his family wanted to stay in the Madison area.

“This opportunity came up, and I was like, ‘yeah,’” Mueller says. “My dad asked me if I wanted to get back into rental. In three quick months, we got the lease back on this property. It was vacant after Hertz had left. We bought back some inventory from Hertz. It went well.”

Besides his background in equipment rental, Mueller spent a year at Menards and also a year at a construction company doing marketing.

“You learn the operations and how efficient they are,” Mueller says of Menards. “You learn the positives and the things that aren’t so pleasurable, and you learn the marketing aspects in the construction industry. I worked under some professional marketing people and saw what their thought processes were. I tried to learn from their expertise and their experiences.”

Mueller also learned from his dad. He said his dad was able to find efficiencies that were not being utilized to increase profits. Today, the competition in equipment rental is strong in his area. He says the opportunities and the real benefits come from customer interactions and his employees’ abilities to help those customers. That’s his company’s strength, the ability to help each customer individually to meet their needs.

“Problem-solving and helping people has been our basis for growing our company,” Mueller says. “It really is customer-service based. Rental has always been really rewarding.”