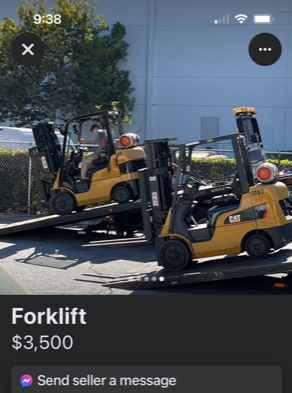 In August 2022, Salvador Soto, owner, LAX Equipment, Inglewood, Calif., became a victim of theft by fraud. His initial tracking helped Inglewood Police not only discover a warehouse loaded with $10 million in heavy equipment but also aided in the return of $3 million worth of that equipment to its rightful owners.

It all began the way many rental transactions have at LAX Equipment. A customer went online to fill out a LAX Equipment rental form for which the customer supplied copies of a driver’s license and a credit card. The request was for two forklifts. While there were phone conversations, there was no in-person interaction with this new customer. The credit card cleared with no problem, so the forklifts, one of which Soto was still paying off, were delivered to a lot — the designated drop-off location.

“Four or five days later, we received a back charge from the credit card company. That is when we found out that something was wrong, learning that the customer had used a fake ID and a stolen credit card,” Soto says. “We called the customer but didn’t receive any answer. We looked for the equipment at the lot that day and then I went there the next morning, but the equipment was gone.”

Soto decided he would do some of his own investigating. He looked at OfferUp and Facebook Marketplace, both popular buy-sell apps, which he had become familiar with after he had skid steers stolen from job sites awhile back. His hunch was spot-on. He saw photos of his two forklifts on both sites. He called the Inglewood Police Department and contacted Alan Vlacich, ARA Insurance preferred agent with Shaw, Moses, Mendenhall Insurance in South Pasadena, Calif.

Detective Jon Thompson with the Inglewood Police Department, who also is a deputized FBI agent working with the Los Angeles Metropolitan Violent Gangs Unit, the Los Angeles Metropolitan Violent Crimes Task Force and the Secret Service Digital Forensics Task Force, was assigned to the case. He contacted Soto and followed up on the rental operator’s findings.

Thompson checked the forklift listings on both buy-sell sites, which also included contact information. “I started making mock phone calls, acting like I was interested in buying the forklifts, but I wanted to see them first. The person I spoke with gave me an address in Los Angeles. I went to a warehouse of a company that is in the market of refurbishing heavy machinery. I saw other equipment, but it wasn’t a significant amount to turn my head. Unfortunately, I wasn’t able to find Mr. Soto’s forklifts,” Thompson says.

He found out, though, that the company had other locations, including a warehouse in Commerce, Calif. 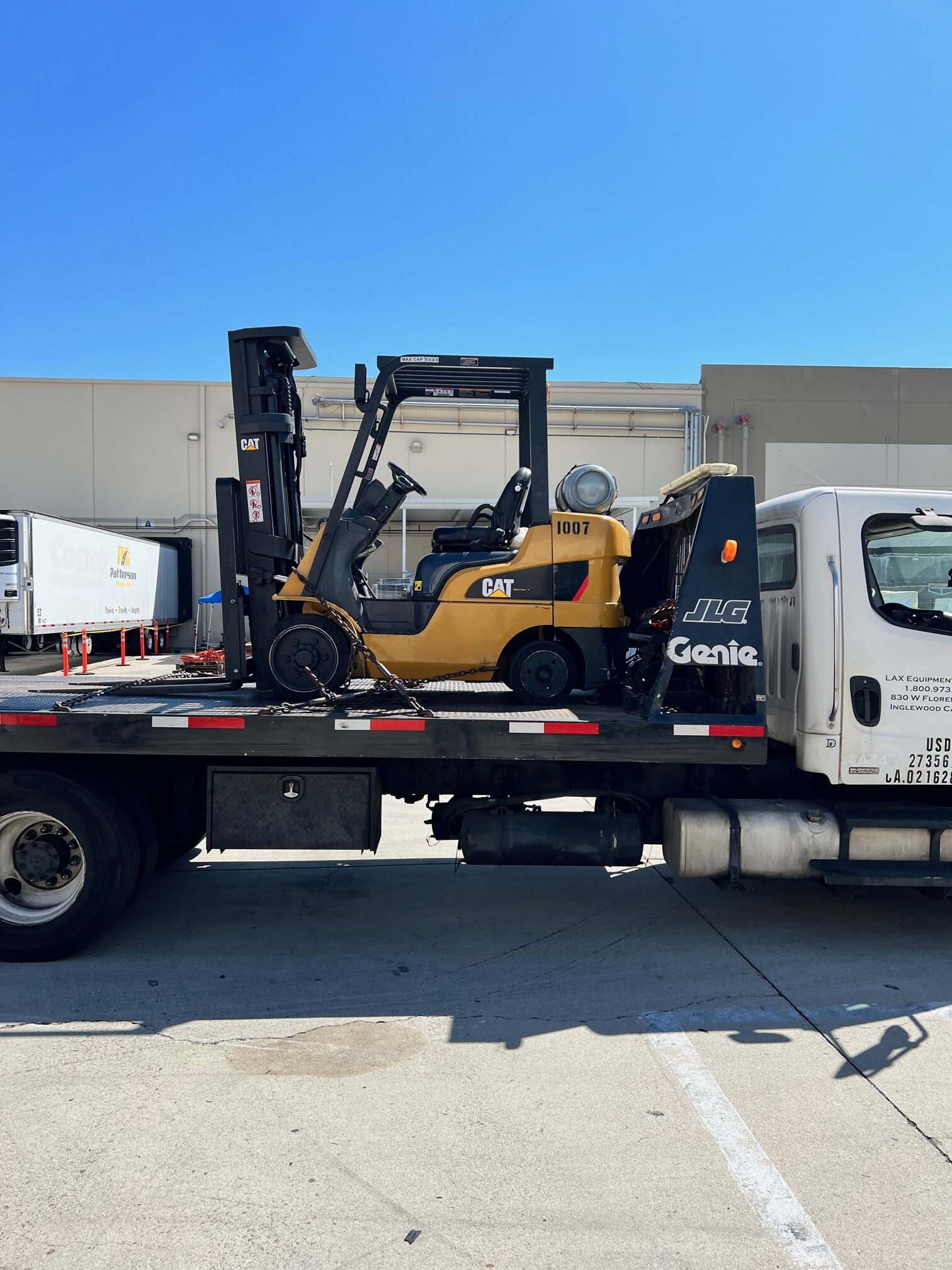 “I was able to figure out that the photos of Mr. Soto’s forklifts were taken at the Commerce location because of the background. I was worried that the seller was a crook, so we had a search warrant that would allow me to take custody of the forklifts if we found them,” Thompson says.

As soon as Thompson and his two partners went in the warehouse, “we knew that something was definitely wrong,” he says. “Our first view was that we saw about 40 forklifts stacked next to each other. There was a lot of heavy equipment and machinery all stacked up. We froze the location.”

He and his two partners split up to canvass the warehouse. “One partner saw 20 forklifts over in one part of the warehouse. The other officer found 40 over in another area and then more in a different location,” Thompson says. “We also caught two of the subjects in the location who were in the process of grinding the paint off and taking off any identifiable markings, including popping off any product identification numbers or serial numbers. They were totally taking these machines apart for resale.”

To assist, Thompson contacted the Task Force for Regional Auto Theft (TRAP), the Los Angeles County regional, multi-jurisdictional, multi-agency task force that deals with car thefts. “Any piece of equipment that has a VIN or serial number can be considered a vehicle. The TRAP officers immediately thought we had happened upon a heavy equipment chop shop. They took over the investigation inside the warehouse,” Thompson says.

“Overall, we found 127 forklifts, 35 other pieces of heavy machinery, including light towers, excavators, bulldozers and even a Zamboni. Initially, we thought it was about $5 million worth of equipment, but when we discovered how expensive this equipment is, we revised the estimate to $10 million,” he says.

Since that initial discovery, the officers have been inventorying the equipment. “We found that many of the machines had their serial numbers sawed off. Some were in the process of the PIN plate being popped off and some weren’t touched yet,” Thompson says. “Of the equipment that still had intact numbers, we are finding that companies were not filing police reports. They were just filing with their insurance companies. We have been finding more hits through insurance than through police reports.” 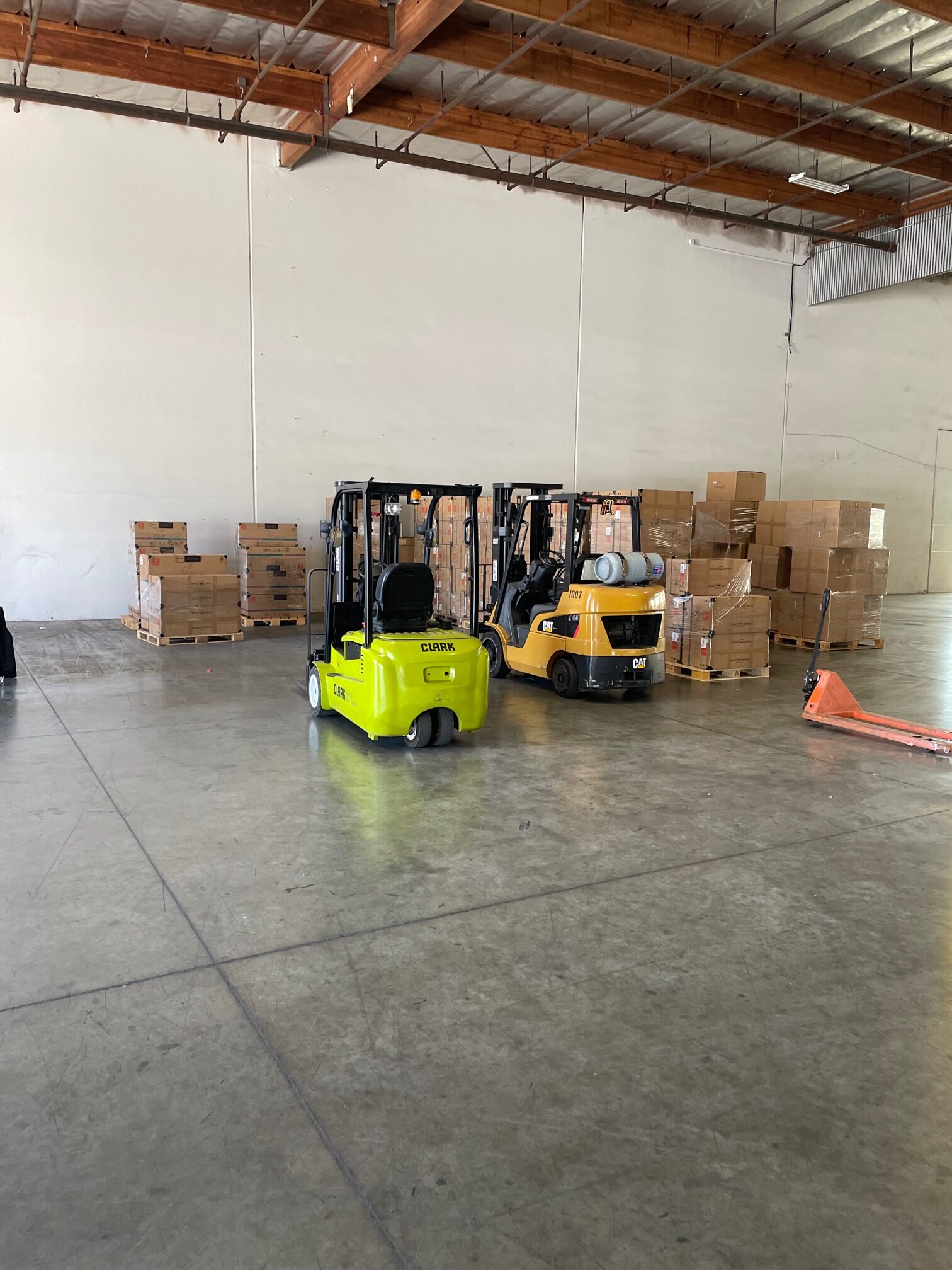 They also have found that some of the equipment in the warehouse was stolen by fraud and some from job sites. “I was talking with an officer from TRAP who said that many thieves are hopping the fence or cutting through the fence and just driving the equipment away from a job site,” Thompson says.

Even though so much equipment was found in the warehouse, Soto’s forklifts were not there. They had been sold, but Thompson was able to learn who they were sold to and tracked down each of the buyers “We found one forklift in Ontario [Calif.] and one in Fullerton [Calif.]. Those individuals bought the forklifts from the warehouse. They became victims themselves as we confiscated the machines. But as I told each one, if the deal is too good to be true, it usually is too good to be true,” he says.

Soto was delighted to receive his two forklifts back. “They are a little beat-up because they were used a lot, but they are fine. We had just painted them, including putting a number on each machine. Because they looked like new, they didn’t touch the paint before they sold them. That is how I could be 100 percent sure those were our forklifts,” he says.

Since the initial reporting of this story back in September 2022, Thompson has received “an additional 200 calls a week,” he says. “It has been great, though, as I have been able to recover and return so much stolen property to its rightful owners.”

While no arrests had been made as of press time, there are eight persons of interest. Thompson has requested federal indictments of those individuals. The request is being reviewed by the U.S. Attorney’s Office.